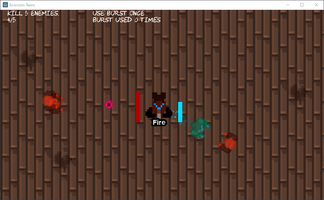 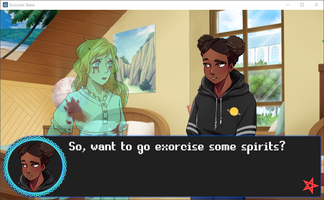 After a couple of months of on again-off again work, I'm finally happy to update Exorcism Teens! Now with improved UI, better Visual Novel sprites commisioned from the amazing Red Chan, and they're going to be released under the Creative Commons licence, which means that you can use them in your projects as well, for free! I've also added in goal, and a lot of behind-the-scenes programming stuff to make it easier for me to add content and scenes. The next big thing I want to work on is the level-up system, which means I need to begin working on Player class and UI for the level up. I'm honestly more nervous about the UI, I think I know how I want it to work, but it's going to be a lot of working from scratch. Creating a player class is going to be easier, but it is probably going to involve me having to go deep into my spaghetti code and untanglling it. Luckily, I find that kind of relaxing for some reason?

Anyway, I hope that this update is a nice surprise to those who have played the game before and sparks the interest of those who haven't given it a try yet. The next update should be a bit longer, and then after that it may just become me working on finishing the full game!

A demo for an RPG I'm developing, where you play as a ghost-exorcist team to try and de-haunt a whole new place