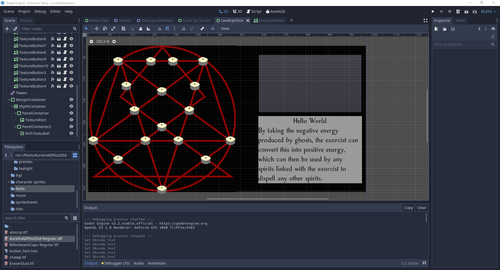 I've recently been trying to create a upgrade system for my project, and I think I've finally found a nice way of doing it.

To begin with, I created the images for the UI, which in this case involves a magic circle and candles. I used p5js to create my magic circle, as it allows me to quickly program a piece of code that generates a cool image, especially as I've been using it for so long. I then used pixilart to create some pretty OK looking candles, though I think I'll try to spend some time improving them later on.

With the assets sorted, it was time for developing and programming. I'm using godot for my project, and it was pretty easy to just layout my screen and put the pieces in the correct place. My upgrade buttons are currently texture buttons, but I may change this later on, as I want these to stay "pressed", and I may have to deal with some hassle later on. But for now, I'm having each button store a reference to the buttons that "lead" to it, and the idea is that these are the ones that are going to have to be pressed. I am certain that this is not a good way of doing this, but I only have this in one place in my game, so I don't mind cutting some corners and not doing these again.

The final thing I need to do is have the buttons actually, you know, UPGRADE! I think that buttons will do 1 of 2 things, either unlock an ability or add to a stat of the player, such as health or speed. As well as this, I plan on having a simple skill point system, that allows the player to get a skill point at the end of each level, so they can always unlock a new ability or gain in their stats. The only thing I don't like about this system is that it means sometimes, the player will have no choice but to go for a stat improvement, which is always a bit more boring, but I suppose I'd rather the player have the chance to practice with the skills they have.

A demo for an RPG I'm developing, where you play as a ghost-exorcist team to try and de-haunt a whole new place